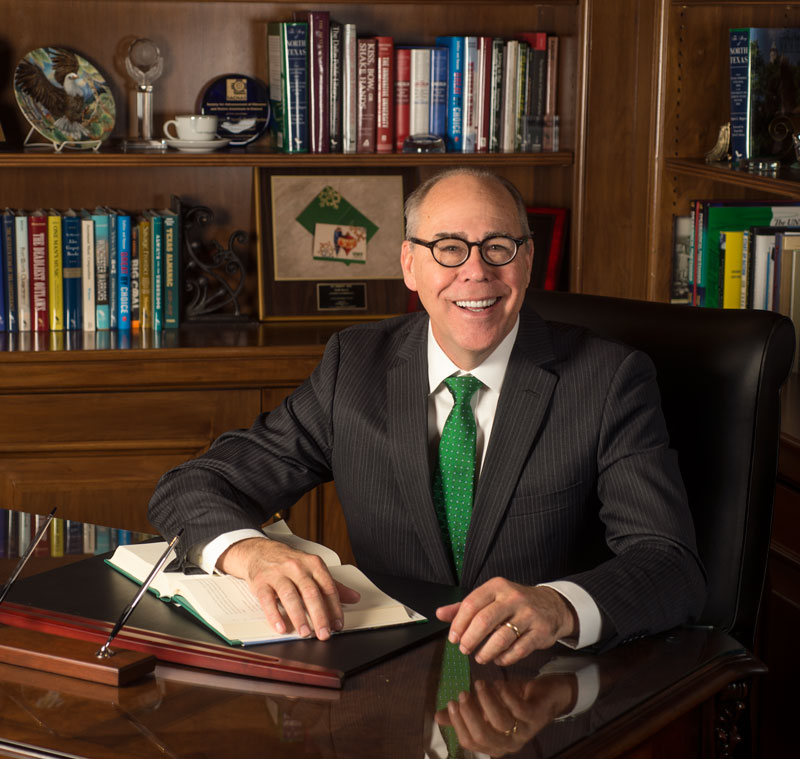 16th president of the University of North Texas, one of the nation's largest universities

President Neal J. Smatresk (pronounced SMAH tresk) joined UNT in 2014 with a vision for leading the University of North Texas to national prominence as the largest, most comprehensive university dedicated to meeting the needs of the dynamic North Texas region.

Under his leadership, UNT has been named a Tier One research university by the Carnegie Classification, identified as a top 10 U.S. public university on the rise, grown in enrollment to serve more than 42,000 students and earned designation as both a Minority-Serving and Hispanic-Serving Institution. Thanks to strategic student success investments, UNT has increased student retention, graduation rate, and its role as a social mobility elevator for students. Today, 88 of UNT’s 244 academic programs are ranked among the nation’s Top 100, including 20 of which are recognized by U.S. News & World Report. Following athletic investments and facility expansions, Mean Green student-athletes and teams are thriving, as evidenced by the men’s basketball team’s 2021 NCAA Tournament win.

President Smatresk has led the charge in creating new public-private partnerships with businesses like American Airlines, Liberty Mutual, Google and JP Morgan Chase. In response to the rapidly changing career marketplace, President Smatresk ensured the addition of 21st century degree plans in fast-growing fields such as business analytics, data science, and urban policy and planning, as well as a partnership with the Dallas Cowboys for an M.B.A. in sport entertainment management. UNT also unveiled the nation’s first bachelor’s degree from a U.S. university on Coursera, the world’s leading online learning platform.

In addition, President Smatresk has worked to expand the university’s services in Collin County by opening a location in Frisco, the second-fastest growing city in the nation. In partnership with the City of Frisco and its Frisco Economic and Community Development Corporations, UNT is building a branch campus scheduled to open in Spring 2023 and offer higher education and research opportunities to students in one of the fastest-growing regions of the country.